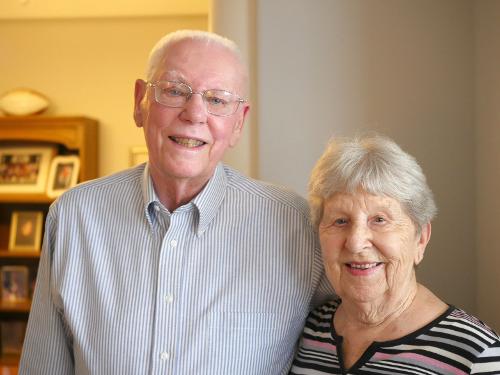 Harry and Shirley Amen knew about The Landing years before moving in. “We watched it being built actually,” said Harry. The Amens have lived at The Landing for almost two years now but they’re no strangers to the Lincoln community. “We’re Lincoln natives. We grew up in the same neighborhood,” said Shirley. That’s how the two met. Harry’s grandparents and Shirley’s grandparents were from the same village in Russia.

Shirley attended Lincoln General School of Nursing and Harry attended college for two years before enlisting in the Air Force during the Korean War. Harry left the Air Force in 1953 and became a chief clerk at Linweld in Lincoln, selling industrial, medical and specialty gases. He spent 40 years at Linweld before retiring in 1994. Shirley worked as a nurse for Lincoln General Hospital for 16 years and spent 9 years working at St. Elizabeth’s Regional Medical Center in Lincoln.

Together the Amen's have five children: three sons and two daughters. Both Harry and Shirley have a pilot’s license and taught all five of their children how to fly a plane. “It was something we loved to do as a family. We would take weekend trips, participate in conventions, pilot derbies and go to different places,” said Shirley. Just how passionate were they about flying? “We quit flying in 2003 and at that time we had 11 different airplanes,” said Harry. The Amen’s didn’t think twice about moving into their home at The Landing. “We absolutely love it here. We’re very happy. It’s not just this beautiful building, it’s the people here, the atmosphere, it’s like one big family. It really is a great place to live.” #HeartsOfImmanuel