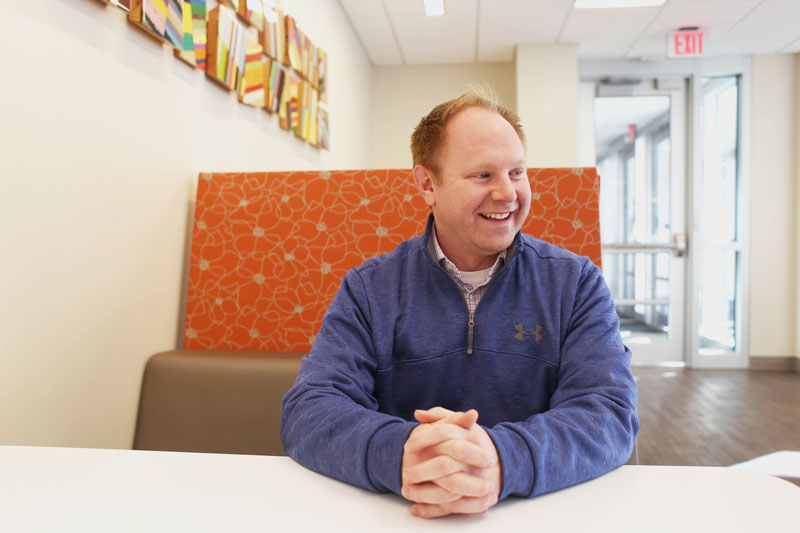 This month we are featuring Alan Jarecki, Immanuel director of development.

Alan is a Nebraska native, having been raised in Albion, a town of just over 1,600 people. He has worked within the non-profit sector for a large portion of his career and was familiar with Immanuel’s name as a leader in the industry before he accepted his current position. The organization’s values, mission, and the fact that it was non-profit, aligned with Alan’s own personal goals and beliefs.

“To me it was a perfect fit and was probably one of the best career moves I could’ve ever made,” said Alan.

As a new employee, Alan was a bit nervous about acclimating at first, but he soon found the process to be natural thanks to the quality of individuals that welcomed him and those that held his position prior to his entrance. He speaks highly of the onboarding process for new employees as he was able to foster relationships and gain new resources before jumping head first into his role.

A typical work day for the director of strategic projects isn’t really typical at all. Every day is different, with a large number of projects and shifting priorities. Projects can range from internal to external, new construction to remodels, and everything in between. Alan emphasized the need to switch gears often and quickly.

Although busy, Alan is able to take a step back and see the bigger picture. He is excited for what the future holds for the company, whether that be future acquisitions or giving a community a facelift. He sees the home office growing, the number of residents and participants growing, and more people interwoven into the Immanuel family.

“We’ve touched so many lives,” says Alan. “Not only are we serving residents and participants, but you have to think of the thousands of employees and their families we’re serving as well. It’s a waterfall effect and there’s no way to capture that number.”

On a personal level, Alan finds his faith, family, and friends to be the most important to him. He is an avid outdoorsman, having grown up hunting and fishing with his grandfather, father and brothers. For the past five years he has gone on week-long backcountry snowmobiling trips with a group of friends, traversing all the way from Wyoming to Colorado. No cell phones, no email. He finds peace in life off the grid.

Alan continues to look forward to the future of Immanuel and is grateful for his position.

“I couldn’t imagine being anywhere else. It’s a place that’s unique and other companies can’t compare in service or care.”