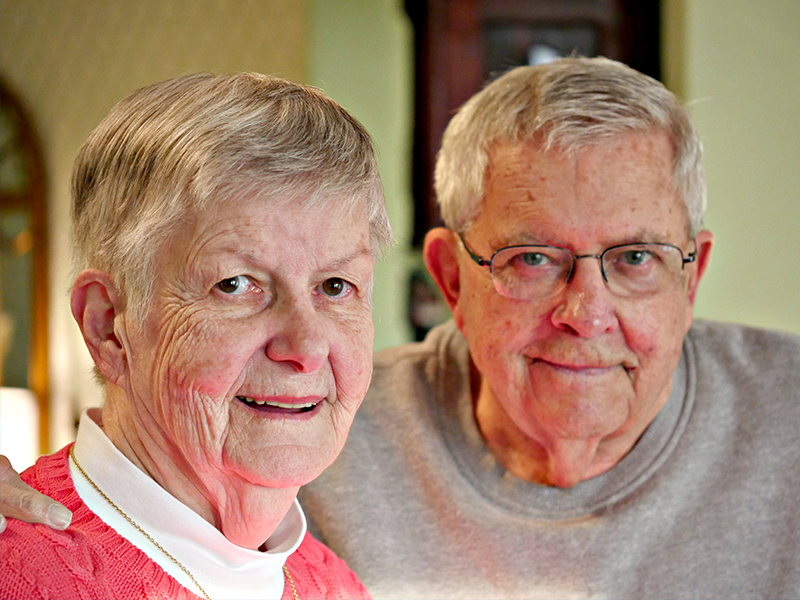 Every resident has a story to tell. And here at Immanuel, our residents are as unique as the stories they tell. The two you will meet in this story are quite the pair. Gates and Daisy Minnick have been residents at The Landing in Lincoln for three years. “It was time to move,” said Gates. “We were depending on too many people,” said Daisy. The husband and wife duo are Lincoln natives. “We were born and raised in Lincoln and we went to school here,” said Daisy.  “It’s even worse. Our mothers were friends,” laughed Gates. The pair met when they were young kids. Gates would always be at Daisy’s family gatherings. “He would always come to my brother’s birthday parties and he was very naughty,” said Daisy. “Don’t tell him that,” Gates chimed in. “He couldn’t play with the other girls. I thought he was pretty annoying too and that’s how it all started,” said Daisy. “Love at first sight,” laughed Gates.

The two spent their entire lives in Lincoln, tied the knot in 1955, started a family and raised two boys and two girls. Daisy’s father owned an auto dealership in Lincoln called DuTeau Auto and turned it over to Gates after he retired. “He asked me to come down and run the dealership,” said Gates. It was the perfect job for him. “I liked to be around people, whether they worked for me or they were customers we were serving. I love people,” said Gates. Both he and Daisy attended the University of Nebraska at Lincoln, graduating with degrees in business administration and secondary education. Daisy stayed home to raise the children while Gates spent most days working at the auto dealership.

As they got older and entered retirement, the couple wanted an easier lifestyle where they didn’t have to depend on so many people to help them around the house. “We think the most amazing thing about The Landing is the staff. They put our groceries away for us one day when we were gone. Little things like that make a difference,” said Daisy. “Everything is done for you. The people here are really spectacular. From the kitchen staff to the maintenance team, everyone is wonderful,” said Gates. The couple didn’t have to go very far to search for a retirement community. It was right in front of them. “We knew a lot of people who already lived here at The Landing, so that’s what sold us,” said Daisy.

The Minnicks, who are in their 80’s, have been married for 61 years. Their secret to a life lived that long together? “She told me to leave but I wouldn’t go,” Gates chuckled. “And I thought he didn’t hear me,” laughed Daisy. “I think we both took those marriage vows pretty seriously,” added Daisy. You have to understand their humor first to know why they’re together. “We have two cats and this is their naptime,” said Daisy. “They didn’t want to be interviewed for this story,” laughed Gates. “My Dad died when I was 7 and my Mom died when I was 23. And I’m 84, I don’t know what I’m still doing here, longevity doesn’t run in the family,” chuckled Gates. “But I’m glad he’s still here. We have been very, very fortunate people. Lincoln has been very good to us and places like The Landing keep you a live. It keeps your spirits going. There’s something very special about this place,” said Daisy. “We absolutely love it here.”