As part of a new #ThrowbackThursday series, every Thursday for a period of time we will post two portraits of a resident side-by-side: one of a resident's younger self and a recreation of that photo present-day. This is a fun way for residents to reminisce on memories, share a few lessons and ultimately appreciate each of their unique features that can be found in both past and present photos!

For this time around, we photographed residents from Pacific Springs Village, one of our retirement living communities in Omaha, Nebraska. This article will be updated weekly with new portraits, so be sure to check-in every Thursday! You can also see Immanuel's recent posts on our Facebook, Twitter and Instagram. Meet Rita from Pacific Springs Village! Rita was between six and seven years old when the first photo was taken. At this time, she was “surviving first grade” in North Augustus, South Carolina. She remembers that she had to walk to school every day and she wasn't allowed to wear pants except beneath her dress when it was cold outside. 😮🌨️ While in school, she took part in air raid drills. During each drill the classroom would run into the hallway and pile themselves into cubbies! And at lunch, no matter the day, you always got a slice of cornbread with your meal. 🍞 Since then, Rita has become a mother and a grandmother. She has also started her own professional organizing business. 👏👏 Her advice to the younger generation: “Don’t be in such a big hurry... you will miss a lot of things” Bob recently returned from serving in the war at the time the original photo was taken. He borrowed his father’s car to take his wife on a road trip around Lake Michigan for a delayed honeymoon, staying at the National Park nearby.🌲Bob was an engineer for the majority of his life. He says that to some, his life might not have been the most “exciting”, but to him, it was satisfactory. One of the greatest joys of his life was watching his children grow up and have families of their own. 👨‍👩‍👧‍👦

The first photo of Breta was taken in front of her fireplace in Elkhorn, Nebraska in 1984. She was newly retired at this time.🙆‍♀️ Breta attended college in Ohio and spent most of her life as a Speech Pathologist, working in multiple cities including Phoenix, Boston and Iowa City. 👩‍⚕️Her and her husband, John, now generously offer scholarships to University of Omaha students. She says that during one’s lifetime it is important to recognize the people who are influential in your life and let them know the impact they’ve had on you.❤️🤝 Cultivate gratitude! David was six years old when the original photo was taken. He grew up in Southeast Pennsylvania and attended the first consolidated school system in the country. The town where the school was located, Kennet Square, is the mushroom capital of the world.🍄 Growing up, he worked in the mushroom industry, played the saxophone and witnessed his father raise chinchillas in their basement! 😯😁 He often brought a pet chinchilla to school for show ‘n tell. David raised billions for charities while in leadership with Goodwill Industries through the “donate your car” program. He also established the first Not For Profit organization in Soviet Russia. His advice for the younger generation: “Live below your means and find a mentor. Older people can help shape ideas.” 🤔💡 Marian was 19 years old when the first photo was taken. At that time she was attending college at the University of Iowa and studying journalism.📚 She loved to attend dances in college, and her favorites included the two-step and grand march. 💃 One of her greatest accomplishments was getting engaged to her husband, who was introduced to her at a basketball game by her previous boyfriend! Her words of advice to college students today are “study harder”. Phyllis was a new 6th – 8th grade teacher at the time the original photo was taken. 👩‍🏫She says her favorite part about teaching was being with young people who believed in her. One of her 6th grade students, Jane, was inspired to follow in Phyllis’ footsteps and became a teacher herself. She is still in contact with Jane, who is now 80 years old. Phyllis played golf for 40 years and served two terms on the field club board, the first woman to do so, in 1985. 🏌️‍♀️🙋‍♀️ Phyllis also recently celebrated her 101st birthday. She shares that it is important to always seek out the best opportunity and make the most of it! 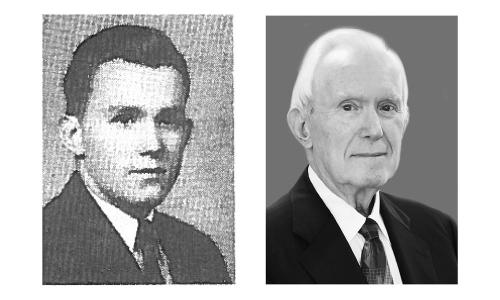 High school graduation in 1949 was the moment John’s original photo was taken. John left for Ellington Air Force base in Houston, Texas (now NASA headquarters) following graduation. ✈️Twelve days after leaving the Air Force, John was called back to the Korean War. After his service had ended, John attended the University of Omaha and became a Certified Public Accountant. He worked at Arthur Anderson for several years, retiring at age 91. He says that the most important advice he can give to those who are currently the same age as he was in the original photo is to get an education.👩‍🏫 John and his wife Breta now generously provide scholarships to University of Omaha students. Karen was twelve years old when the original photo was taken. She remembers playing violin at this age, along with several other siblings who each played a musical instrument. She speaks fondly of the violin and shares that it brought a lot of joy to her life. Before Karen retired, she was an influential and loving school teacher to many students. The first photo was taken when Marion was 16 years old and graduating high school in Preston, Iowa. While in school, she loved basketball, but there were no opportunities for women to play sports. She instead enjoyed her Physical Education classes. She is proud to have grown a wonderful family since then. She has two sons and a daughter, as well as eight grandchildren and eleven great-grandchildren. Her granddaughter is a waitress at Pacific Springs Village! She says the best advice she can give the younger generation is to “enjoy life”.